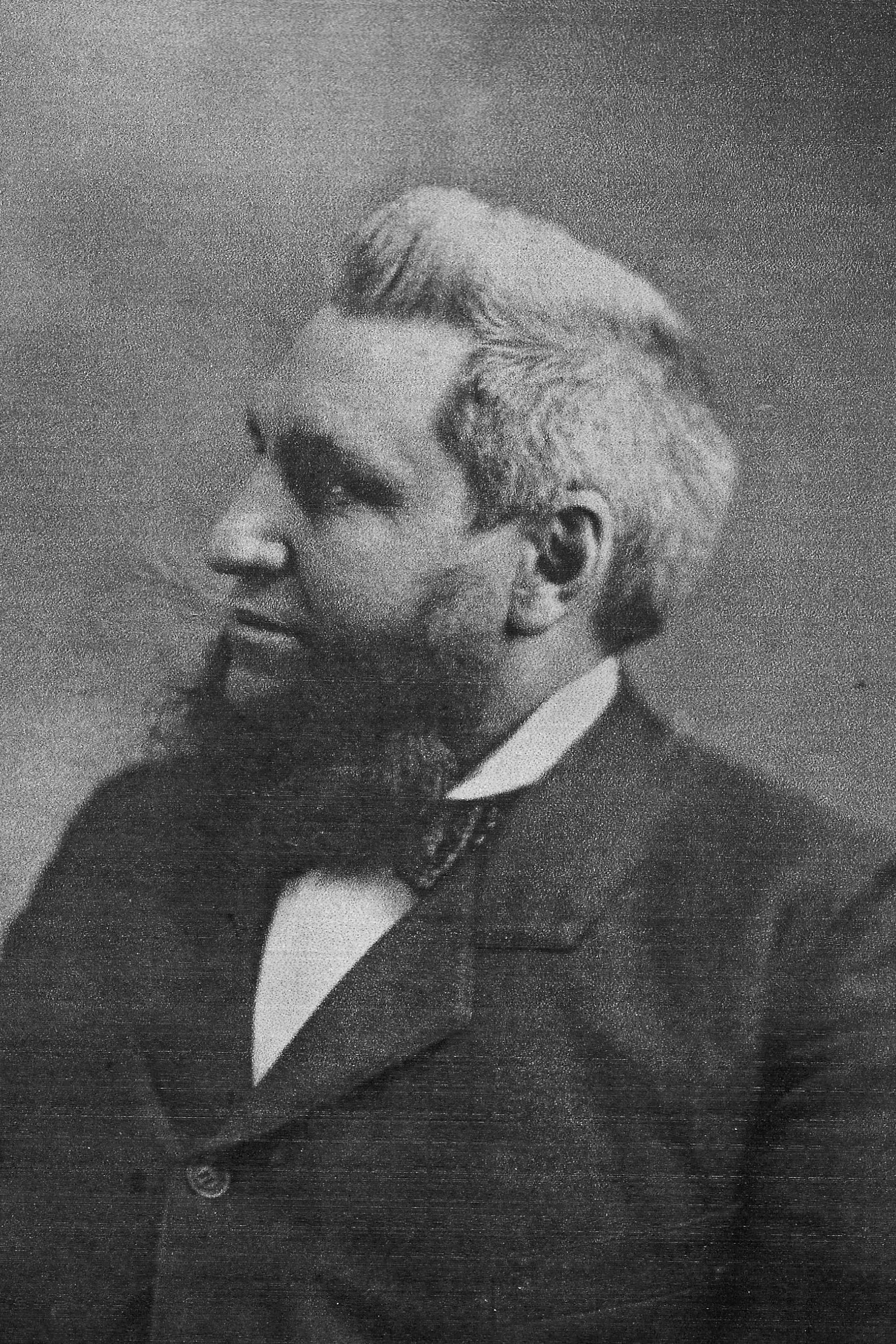 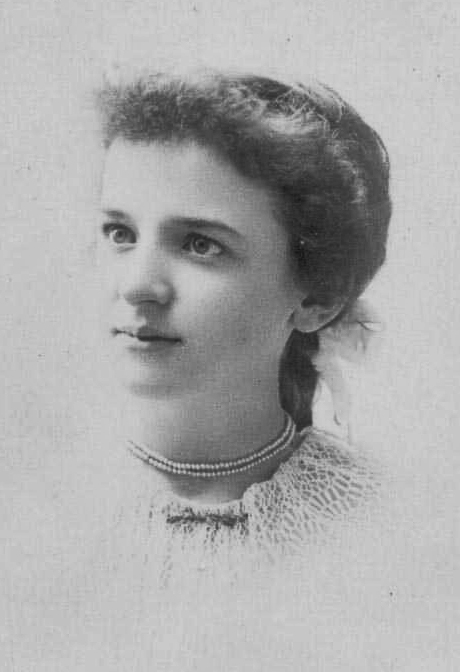 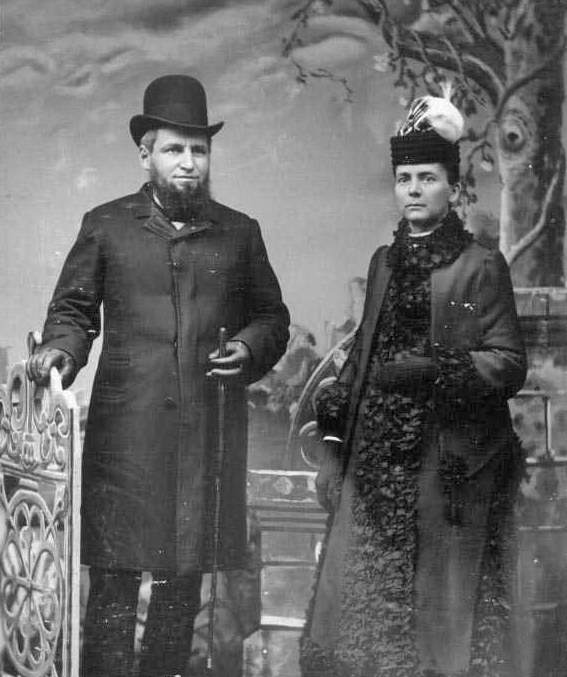 Thomas Oliver
Mary Ann Eddy
Thomas Oliver and Mary Ann Eddy
Thomas Oliver was born in Woodstock, Ontario, Canada on August 1, 1852, to Canadian mother Jane Speirs and Scottish immigrant father and farmer Adam Oliver. Thomas Oliver was the oldest of eight children. In his youth, Oliver lived on his father’s farm, where he would tinker and build various devices such as windmills and threshing machines with only basic farm tools. His inventive mindset often caused his family woe. One morning, his mother was searching for the copper tea kettle, only to discover that it was pounded and converted into a steam engine boiler.

On May 27, 1874, Thomas Oliver married Mary Ann Eddy, one of eleven children of Ann Edmonds and Constant Eddy, in Paris, Ontario, Canada. Thomas Oliver and Mary Ann’s first child, Mary Alvira Oliver, was born on April 11, 1875, followed by Judson Adam Oliver on September 23, 1878. Their third child, Wilbur Eddy Oliver, would not be born until July 26, 1890.

In 1879, following the death of Oliver’s mother, the Oliver family relocated to a home on Fifth Street in Lansing, Iowa (although Thomas Oliver would not become a naturalized U.S. citizen until 1890). Thomas Oliver became a Methodist Circuit Rider for the Upper Iowa Conference of the Methodist Episcopal Church and began preaching in Lansing, Iowa. The Oliver family resided on Fifth Street in Lansing as of June 1880. Reverend Oliver frequently traveled to various Iowan cities in his circuit to preach, including Staceyville, Mitchell, Ridgeway, Dyersville, DeWitt, and Central City. 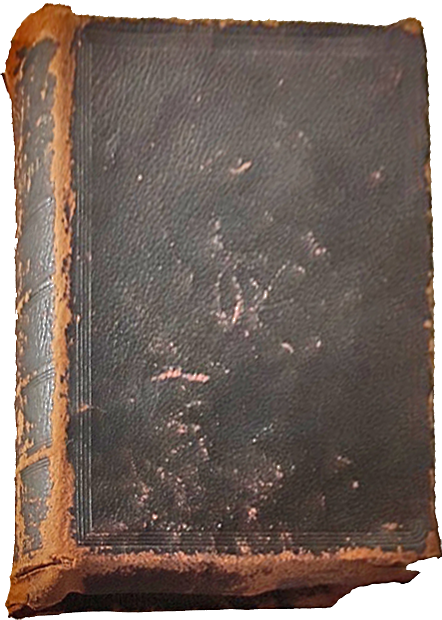 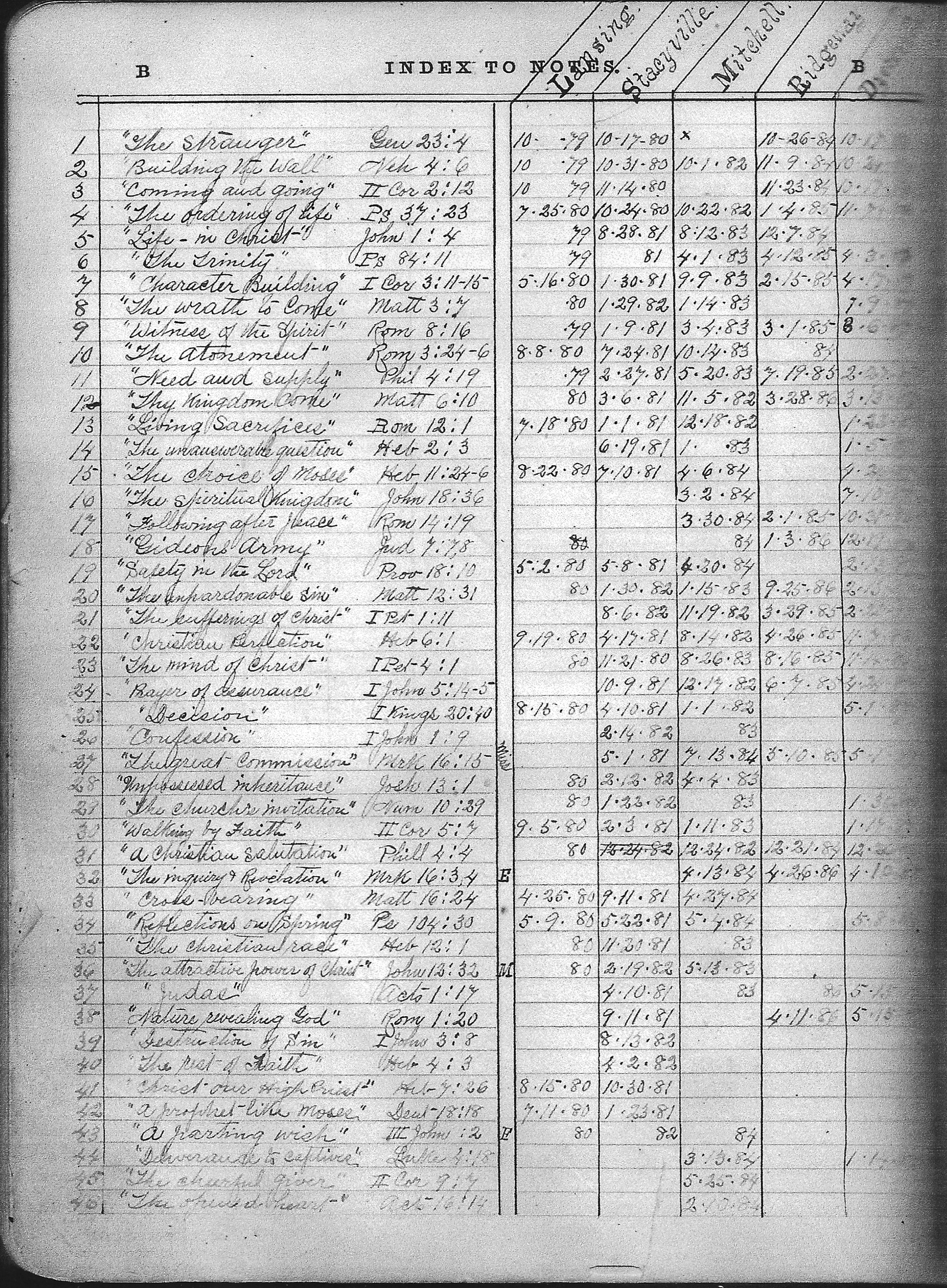 Reverend Thomas Oliver's 1889 Bible
Thomas Oliver and Mary Ann Eddy
Reverend Oliver always carried a personal copy of the Bible. In the index of his Bible, he documented the sermons he preached. These records indicate the sermon title, the scripture from which it came, and the date and town in which it was preached. In 1889, he replaced his Bible because his first one was worn from hard use. His second Bible contains sermon records which date to when he first started preaching, indicating the records were copied from his first Bible. In total, 173 entries are listed with the latest dating to August 28, 1892.

In 1889, during his preaching travels, Reverend Oliver was sitting at a bank in DeWitt. It was there he saw a stenographer using a typewriter and observed its inefficiency, since the typist could not see what was being typed. He did not examine the machine because its mechanics appeared crude and upside-down. Oliver set out to create a better machine with visible writing so that his sermons could be typewritten.

Oliver created a couple prototypes by utilizing drawings, wire devices, and overall crude and simple materials. It is said his prototypes were made from tin can strips and rubber. These prototypes did not feature the famous downstrike typebars; instead it had the typebars arranged in a pivoting arc with a hammer mounted to strike them against the platen. This design also featured an ink roller instead of an ink ribbon.

In order to fund patents for his typewriter, Thomas Oliver visited Dr. Charles Joseph Peterson, a personal friend and dental surgeon in Dubuque. Dr. Peterson bought one-third interest in Oliver’s invention, and on August 26, 1890, while residing in Monticello, Oliver filed his first typewriter patent, which featured the pivoting typebar arc design. Both Oliver and Dr. Peterson would receive royalties on each machine sold. 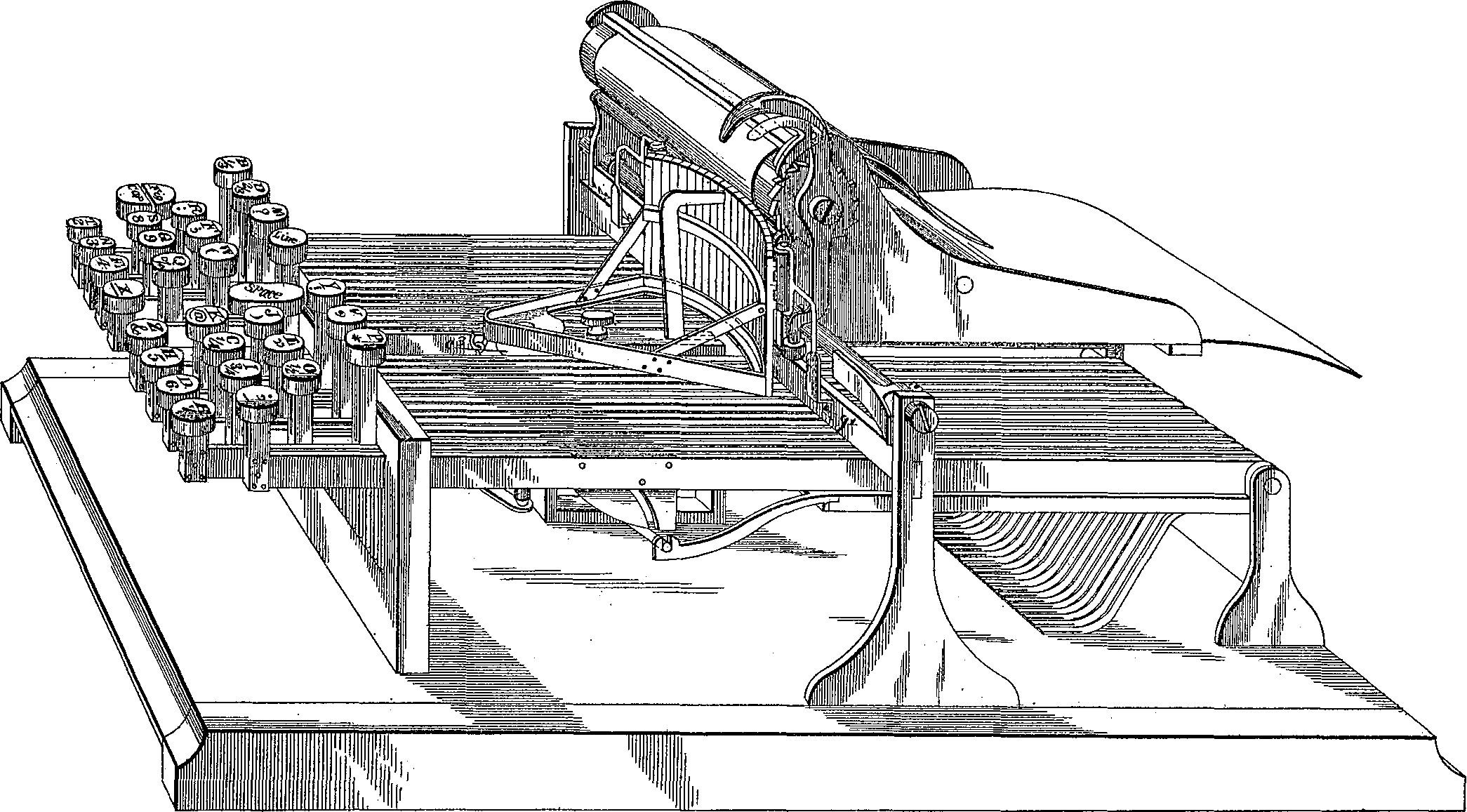 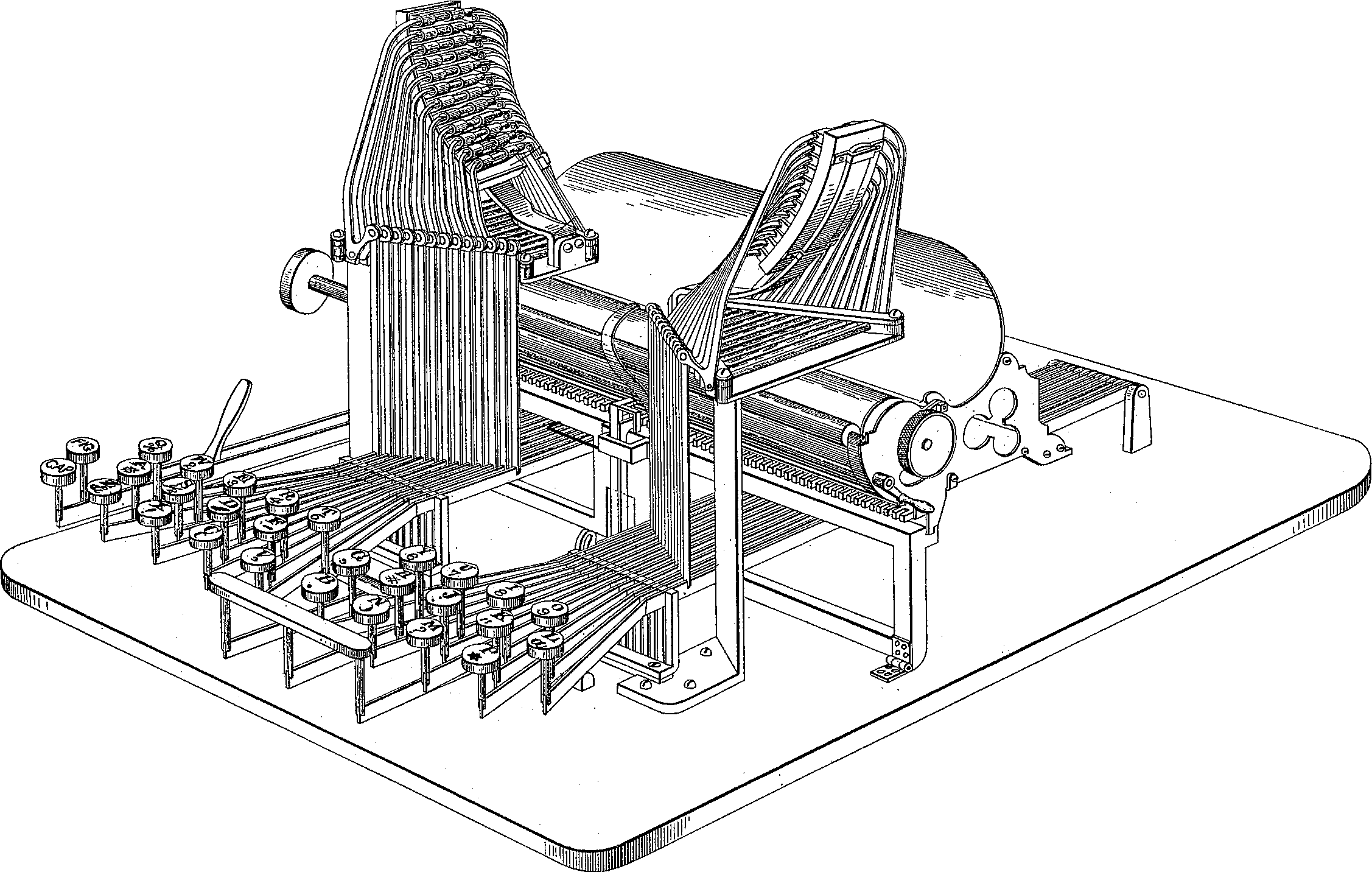 Reverend Thomas Oliver’s Pivoting Arc Typebar Design
Reverend Thomas Oliver’s U-shaped Typebar Design on a Rectangular Base
In 1891, with Dr. Peterson’s funding, Oliver developed his second prototype alongside two machinists, one of which was Stephen Horr. The pivoting arc typebar design of this prototype proved unsuccessful, so Oliver continued to search for a better alternative. He eventually came up with the famous downstrike typebar design while he was in his study reading a book on machinery. He fell asleep in his chair and awoke shortly after, jumping and shouting “eureka” to his wife as he began to sketch a U-shaped typebar he saw in his dreams. He went to Dubuque to get old watch and clock springs to make the typebars for a prototype model. Thomas Oliver spent months perfecting this new downstrike mechanism. He officially employed Stephen Horr as a machinist in June 1892 to develop the downstrike mechanism. 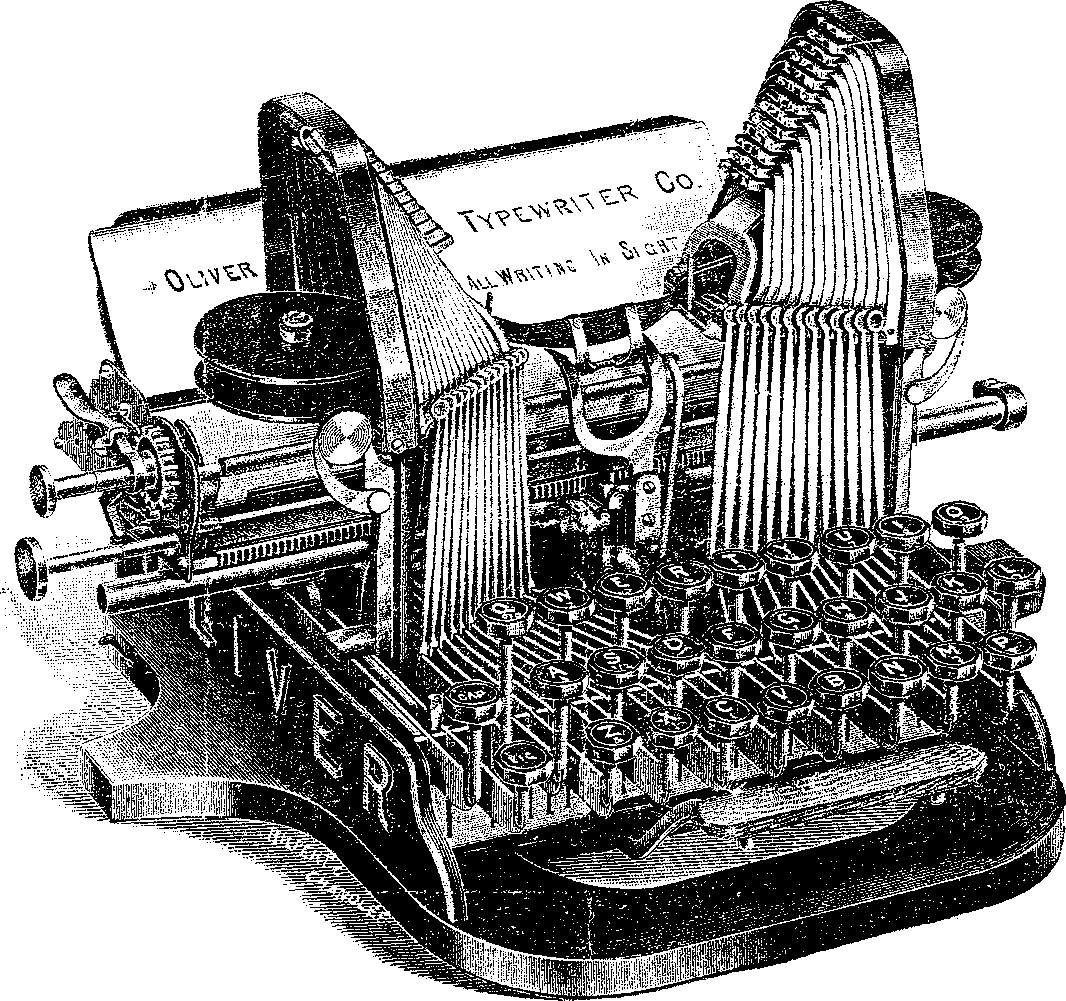 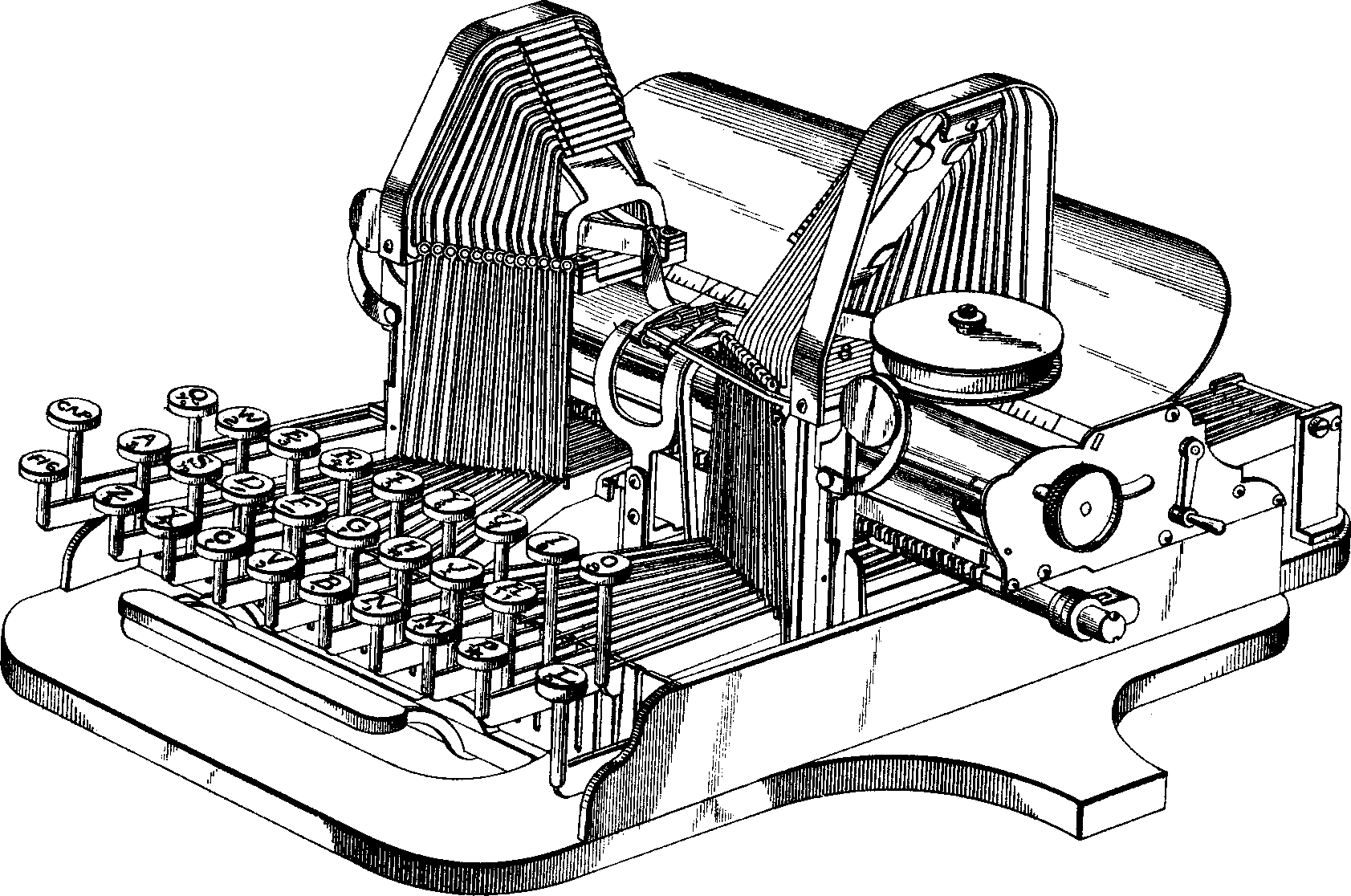 Oliver No. 1 Illustration
Oliver No. 1 Illustration in U.S. Patent No. 542,275
On September 12, 1892, while residing in State Centre, Oliver filed his second typewriter patent (now featuring the famous downstrike typebars), which also lists Dr. Peterson as a one-third assignee. Once Oliver was satisfied with the downstrike prototype, he boxed it up in a wooden case and took it to Dubuque to put it on exhibition in the Noyes art store. Large crowds gathered, as the value of the machine was exemplified. It is said that he offered several parties a one-fourth interest in the patent during the exhibition, but no one secured a deal. However, Oliver eventually raised enough capital to organize a stock company. 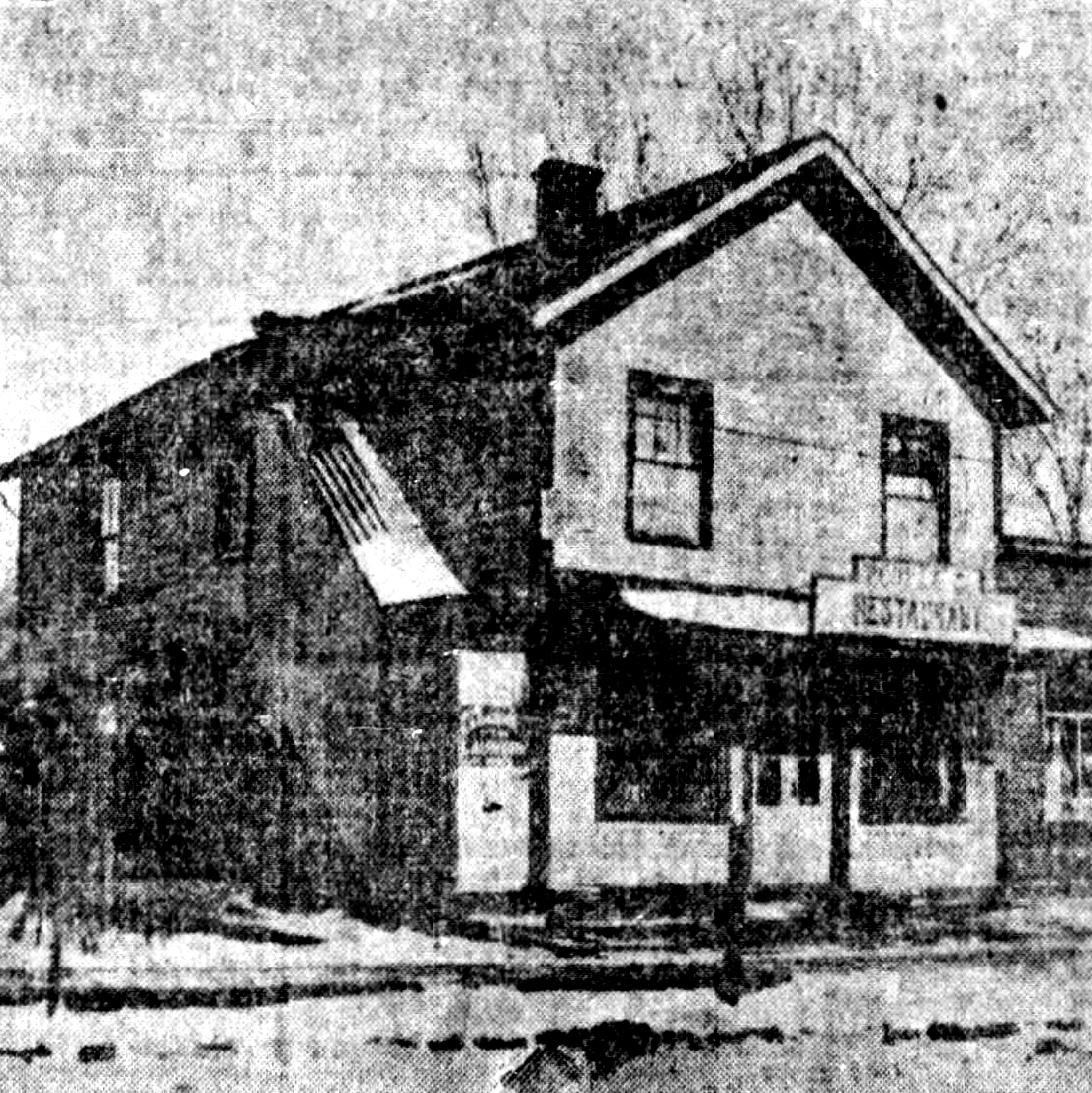 Reverend Thomas Oliver’s Epworth Residence
By this time, Oliver was residing in Epworth, Iowa where he had been developing the typewriter. The upstairs of his residence was utilized as a makeshift factory, where five machinists were employed. With the combined efforts of Thomas Oliver and these employees, twelve typewriters were produced over the course of a year. The bases of the machines were cast by the Adams foundry while other parts were furnished by more local industries. These machines were mostly sold locally to Thomas Oliver’s ministerial friends and associates. Thomas Oliver first advertised his invention in the September 1893 issue of the Illustrated Phonographic World magazine. On September 19, 1893, Oliver filed another typewriter patent featuring the downstrike typebars. The machine of this patent possesses the final shape of the Oliver No. 1 base and includes ribbon spools.

The Epworth factory was later used by a variety of businesses, including The Iowa Light Company.
Oliver soon realized the current workspace was too small to increase production, so an application was submitted to city council for assistance. In response, a two-story brick factory was constructed by Zephaniah Kidder in 1894, just north of the Illinois Central railroad tracks in Epworth on Center Avenue. Kidder was one of three men who helped lay out the town of Epworth on portions of their holdings. To fund the factory, shares were sold in the new typewriter firm, and with each share sold, the purchaser was given a lot in the north part of town. This new factory employed 16 workers once it was completed. They were now able to produce six machines per week. It is believed the first 100 machines made at the factory had flaws, and the company nearly went broke making things right for the customers.

On September 18, 1895, Thomas Oliver and Douglas Smith went to a regular meeting of the Racine Business Men’s association in Racine, Wisconsin to try and secure funding for a larger manufacturing plant. They presented the Oliver typewriter and all of its advantages to everyone in attendance and the feedback was very positive. Oliver and Smith explained that they wanted to relocate to Wisconsin because of the availability of skilled mechanics.

On October 15, 1895, the committee met again at Hotel Racine to discuss forming a company there to manufacture the Oliver machines. Thomas Oliver again showed the machine to anyone who was interested at the hotel. Two days later at the next meeting, the committee presented the report directed towards Thomas Oliver and Douglas Smith. The committee reported that they are in favor of a typewriter factory in Racine. They believe the machine was superior to all other typewriters on the market at the time and congratulated Thomas Oliver on his invention. The report proposed the people of Racine subscribe and pay for capital stock of the company to be organized. Thomas Oliver and other stockholders would have to turn over the patents and good will for the new company’s capital stock. Twenty percent of this stock was to be spent as needed by the company. Thomas Oliver would receive a royalty on each machine manufactured and sold.

By December 6, 1895, the Wisconsin capitalists formed a plan rebuild the Scotford plant in Kenosha, Wisconsin (south of Racine) to use as the Oliver factory. The Scotford plant was two stories tall, 12,000 square feet, and would be equipped with a 50-horsepower boiler and engine. Fifty skilled mechanics would have been initially employed, with operations to begin the following spring. Zalmon Gilbert Simmons, Sr., founder of the Northwestern Wire Mattress Company (later changed to the Simmons Manufacturing Company) was funding sixty percent and thirty-seven percent was to be funded by the citizens of Kenosha. Only the remaining three percent stood in the way of securing the deal.

In addition to the eponymous typewriter, Oliver also invented other devices, including a cotton harvester. The concept for this invention came to Oliver when he first relocated to Iowa, but his first model was not on the market until 1903. By 1908, the Oliver Cotton Harvester Company was headquartered at the Electrical Building, 118-132 West Jackson Boulevard, Chicago. On Saturday, February 6, 1909, an improved cotton harvester prototype designed by Oliver was to be shipped from Chicago to Pine Bluff, Arkansas where it would be set up the following Monday. On Wednesday, February 10, Thomas Oliver would demonstrate his machine to government officials four miles east of Pine Bluff on a plantation owned by Reverend David L. Trimble.

Unfortunately, the fate of Thomas Oliver took a different course. On the afternoon of February 9, 1909, Oliver and his second wife of 11 years, Danish immigrant Olga Ottonia Christiane Nielson, arrived at the Argyle train station, part of the Northwestern Elevated Railroad. They were on their way to Pine Bluff by way of the Illinois Central Railroad. However, the pair never managed to board the train. Thomas Oliver suddenly collapsed in his wife’s arms due to heart failure at 56 years of age.

The following Thursday afternoon, the Oliver Typewriter Company held a memorial in one of the largest rooms in the factory for the late inventor. The superintendent, his assistants, around 1,000 employees, and several hundred citizens of Woodstock attended the memorial. Reverend Newton Austin Sunderlin, a friend of Oliver and former pastor, spoke at the memorial. Reverends S. C. Hay and J. W. Hackley gave an opening prayer and the benediction, respectively. Judge Charles H. Donnelly gave the address, which highlighted the life and success of the inventor. On February 14, 1909, Oliver’s body was delivered to Graceland Cemetery in Chicago, but housed temporarily until he was finally buried on June 30, 1910.